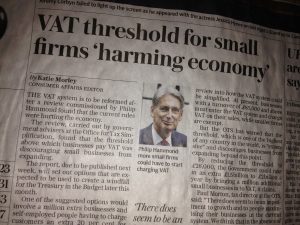 [Post Budget update: The VAT threshold will not drop from £85,000 as threatened. It looks like Chancellor Hammond was leant on by his colleagues.

However the government will report on possible changes to VAT in April 2018. Don’t be surprised if this comes back.

Meanwhile that £85,000 threshold will not go up for two years. This is unusual. It’s always gone up by inflation in the past. This will catch more businesses as they slowly increase their turnover.]

There’s an important Budget speech from Philip Hammond on 22 November, and I suspect the Chancellor will be looking for ways to get more money off freelancers and self-employed people.

Speculation and rumour are already finding their ways into the newspapers, sometimes sourced from semi-official briefings which are aimed at softening us up or testing the water.

On Saturday I spotted an unexpected headline on the front page of the Telegraph. Apparently the VAT threshold is  “harming the economy”.

Why would the Telegraph run a convoluted VAT article on its front page?

The headline in the online version (£) gives a clue:

“One million businesses and self-employed people could be dragged into VAT system”.

It looks like we’re being softened up for a possible change to VAT which could have a dramatic affect on a lot of people I meet on our freelance finance courses.

The options, according to the article, have come from the Office of Tax Simplification and include:

Putting the article on the front page rather implies that the last option is a serious possibility.

Many countries have a much lower VAT threshold than the UK’s £85,000.  Some (Malta, Spain, Sweden…) force all businesses to be VAT registered as soon as they set up.

Many self-employed freelancers will be horrified at the thought of having to charge 20% extra and deal with VAT admin.

I’ll be keeping a close eye on what Philip Hammond says on 22 November.